From a recommendation from a classmate (Thanks Ernest), last minute I was graciously allowed to volunteer for the TechCrunch Disrupt conference held in NYC. Aside from a variety of interesting speakers and panelists, famous people walking around, Yahoo! CEO Carol Bartz getting angry, Major Bloomberg talking startups in NYC, and a showcase of a bunch of cool startups, I had got to hang out with a large volunteer base from a lot of other schools and companies (MIT Sloan had 10+ volunteers, great representation).

If I were to sum up the future of where technology is going, as I personally gleaned from the conference, it would be three words (and it probably won’t surprise anyone):

As an aside, as we heard news about Apple surpassing Microsoft in market cap, just by observation, it was amazing to see the number of iPads being used at the conference. Many of my personal friends can’t even buy one because of the shortages, and yet this conference was full of them. As a rough rough estimate, I’d say about 10% of the attendees had them, and the number would jump to 30% for those that were a part of startups. And of the laptops being used, I’d gander a majority share were Macs (I can’t say the same about my MBA class). Again this is just by my personal observation. I guess for this crowd, it’s not too surprising, but still…is this an indication of an even bigger trend to come?

I’ve been talking about making a website and a blog for quite some time now. Last year, I took the first step of finally purchasing douglashwang.com, but for a full year I did nothing with it. I figure this post is a start.
I outlined vaguely some of the things that I’ll mention in this blog here and  a small bio about who I am is here. Be it family, friends, or future friends, I hope the things I write here could be of use, interesting, throught-provoking…or even life changing! Some of the posts will be of neat topics, while others will be mundane things that happen in my personal life. I welcome all your comments, corrections, and improvements (any suggestions to make this blog look better, please let me know). Enjoy  =) 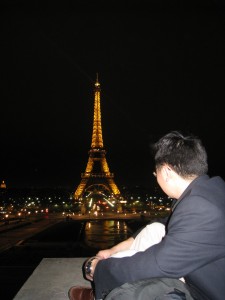