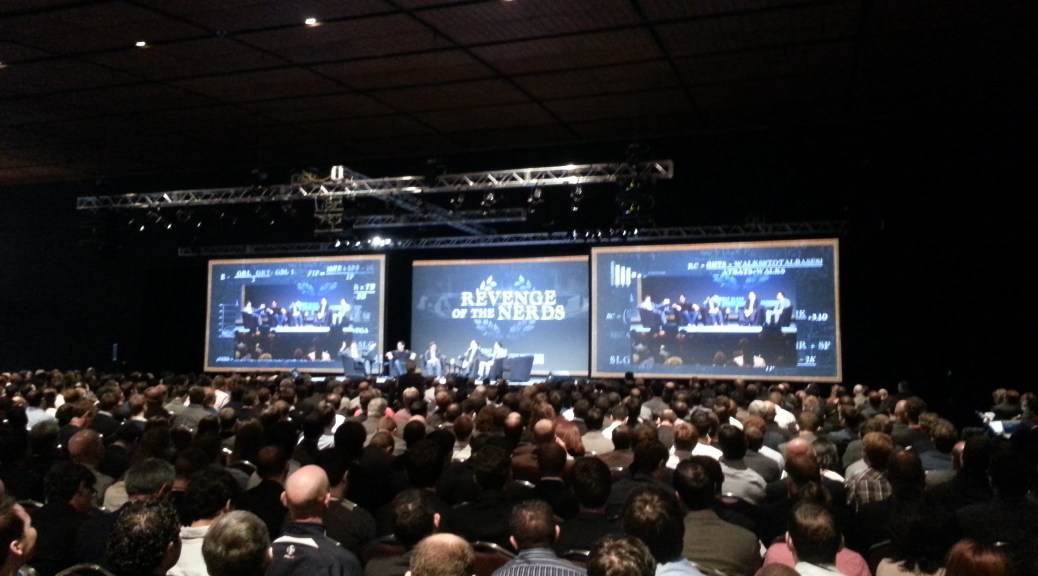 Baseball season is now in full effect. The NFL draft just finished. We’re in the midst of the NBA playoffs. And the 2013 7th MIT Sloan Sports Analytics Conference seems like a distant memory. It was a baby of mine from 2011/2010 when I was one of the lead organizers. It’s fun seeing it grow, and get better every year. My favorite part: every time I go, there’s a renewed realization, inspiration, and appreciation of using analytics to make better decisions (in life).

Every once in a while, I try think about the concepts of sports analytics and try to apply to “business.” One particular concept that I think would be interesting to think about is WAR.

It is one my favorite metrics in baseball (or basketball);  this concept of WAR (Wins Above Replacement) or WARP (Wins Above Replacement Player). It summarizes a player’s total contribution to a team, with respect to a comparative “replacement” player. For instance, Player A could give 2 more “wins” vs the “average” player in that position, and hence that much more valuable to the team.

But, also looking at salaries, you could also see what you’re paying for that performance – to see if you’re paying over-market, or under-market. As an example, see this chart out of fangraphs.com, it shows how the cost of WAR per position by year: 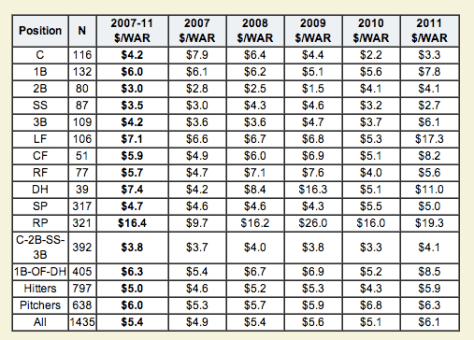 As an example, the cost for a SS WAR is about $2.7M in 2011. So if you have a contract worth $20 for 4 years, for a shortstop with a per-season WAR of 3, then you’re potentially overpaying according to the market WAR value:

Now, applying this lens to the “business world,” especially in tech with this war for talent going on, it is important to be able to effectively gauge your employees to see if they are giving the value that you’re providing in investment. How’s their VAR (Value Above Replacement)? (It’s odd to say “wins” since it’s harder to define it in “business” vs sports.)

If you’re paying “top” for “top talent,” are you getting the right value vs others in that position? Rather, would be more useful to invest in the team, to get faster/better tools to raise the output of everyone? Or, is it more valuable hiring two people more junior? Also, what is considered “replacement?” (Though, I would generally consider this someone in a similar position at another company.)

In baseball, we have plate appearances, steals, BA, OBP, SLG, OPS, UZR, ERA+, BABIP, FIP…and the list goes on (thank you Sabermetricians). But at a company, each product, team, and business unit is different. Speed to launch, sales, customer satisfaction, stock price, financial metrics, and even the soft skills matter – communication, synergy, culture fit, how fun to work with…it’s definitely a hard problem. But, if businesses could tackle some of these questions (one approach is here), then comparing “raw” salaries vs “experience” may not matter as much anymore, instead companies (and individuals) could better understand their relative value vs others at the same company, and/or industry, and use it better their own situations.